In the hands of the ocean

The Bundschu couple and the Hawaiian temple massage

Everything has to do with the sea, its power, its rhythm, its laws, its movements. Hawaiians are convinced of this. They see themselves as descendants of an ancestry of great navigators. They found their way even blindly over thousands of kilometers of open ocean, and this also in the spiritual sense. Pioneers of this South Seas wave, which is now spilling over the wellness scene in such a relational way, were Margarethe and Christoph Bundschu in Germany. The couple has been running their “lnstitut Hawaii” in Gräfelfing near Munich for twelve years. There they massage themselves in the style of the ancient Hawaiian temple rite and have trained dozens of masseurs. Nevertheless, they view the latest development with skepticism . “Much of what is offered nowadays as “Lomi Lomi Nui” has little to do with its origins,” says Margarethe Bundschu. She used to be a dancer by profession, has a classical ballet education and teaches among other things Hula at her institute.

ln the rhythm of the waves

Dance has a lot to do with Hawaiian bodywork: “Characteristic features of the traditional Hawaiian massage style are the flowing, circular strokes with fingers, hands and forearms that merge into one another,” explains Christoph Bundschu. “These movements are copied from the flexibility of palm trees dancing in the wind and the different qualities of water.” 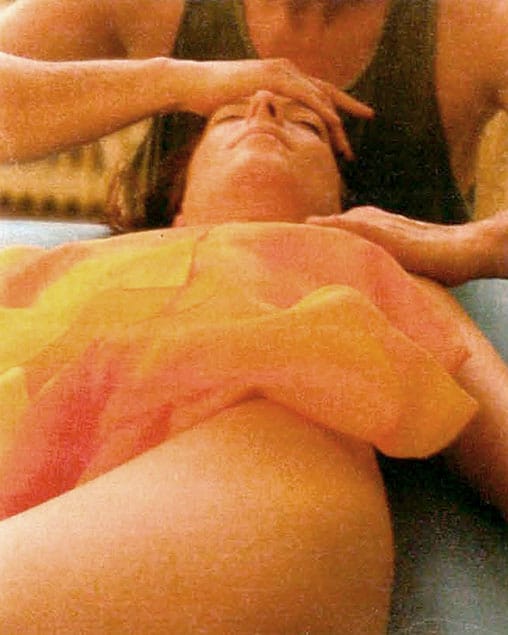 He begins to move around the massage bench with a constant, intricate sequence of steps reminiscent of a one-person waltz: This so-called “flying” serves the endurance and concentration of the massager. A treatment lasts for two hours and is accompanied by chants – or if you like – prayers for the well-being of the massaged. Another important element is the so-called “backstroke”. According to its principle, every stroke movement already has its counter-movement in itself – just as every wave also already carries the backflow of water in itself. An experience that is intensified when the masseurs work in pairs, i.e. four-handed. In other words: If the ocean had hands, they would be Margarethe and Christoph Bundschu’s. A Hawaiian massage, performed by well-trained people, is more than a massage. It was designed as a healing ritual that would be supportive at turning points in life – entering the adult world, pregnancy, before battles. It does not leave the massaged in the passive part. Your goal is to get him to “go with it” internally, so that he can rediscover and activate his body’s own powers. This idea corresponds to the teachings of the ancient Hawaiian “Kahunas”. These “masters”, shamans and priests, worked for a long time only in secret. “Until 15 years ago, their activities were officially forbidden in Hawaii,” says Christoph Bundschu, “the missionaries did a great job there.” The Bundschus’ teacher was a Kahuna: Kahu Abraham Kawari lived on the island of Kawai’i, but also spent a lot of time abroad and in the “main land,” as the Hawaiians call the U.S. mainland. He was a modern-day kahuna who gave lectures and workshops, “coached” managers, and was sometimes called in as a security consultant to the Hawaii Police Department – and was not held in equal esteem by all native Kawaiians. He gives, he sells too much “secret” knowledge of the Kahunas to the whites, the strangers. Kahu Abraham Kawai’i’s widow “Ho’okahi” has Austrian and Ukrainian ancestors. She continues her husband’s work teaching Hawaiian temple massage. ln distinction to “Lomi Lomi Nui”, the variant “for home use” she calls it “Romi”. It is not the masseur who heals. The massaged person heals himself. “Romi” helps him to find his balance again, to understand his body in harmony with nature again.

from time to time we send out a newsletter to keep you up to date.